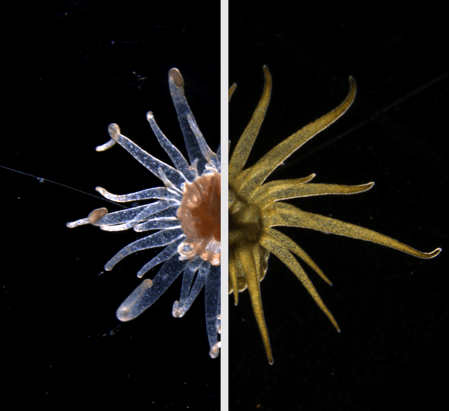 Through a two-part experiment, the authors were able to establish a previously unproven connection between how aiptasia obtains its symbionts and how coral obtains its symbionts. They initially visually saw the strongest connection to be the SSB01 Symbiodinium strain in both species. To do this they tested how aiptasia larvae and two types of coral’s larvae, Acorpora digitifera and Acorpora tenuis, adopted various strains. After a period of incubation, they looked at the specimens using light microscopy could see how the different algae were introduced into the systems. To find the genetic cause of the correlation of adoption for symbionts they compared the genomes of the organisms and found 19,771 genes out of 26,039 genes that were present across the species during the experiment. After which, they narrowed down to 41 differential expressed genes. They deduced that this experiment can be fairly representative of all coral due to the intertwined taxonomic relationships but will differ based on environments. Since the species are not identical there was a discrepancy found in strain SSA01 where the aiptasia adopted this while the coral specimens did not.

To conduct the experiment they had multiple stages that lasted for multiple days. They first incubated the colonies for 10 days to give time for the Symbiodinium strains to infect the various larvae after which they tested the polyps for four days. The paper makes a note that they removed all the algae from the environment which I may have misinterpreted but it sounds like they completely sterilized the water which sounds may be difficult to replicate in other studies. Nonetheless, they then monitored the coral polyps post metamorphosis for up to 49 days but saw 100% adoption after 23 days. They do note that in the long-term these results may change as the corals have been observed to replace symbionts. To measure the infecting symbionts they used light microscopy and observed the density of light. In order to create a control, they used inert fluorescent polystyrene beads which were also observed to be absorbed.

To help explain this phenomenon the research group used RNA sequencing to compare gene expressions of the aiptasia that adopted symbionts and ones that did not. Through transcriptomic and proteomic methods they were able to isolate various genes that relate to multiple expressed genes to that might correlate with the potential of a symbiotic relationship such as phagocytosis.

Though this paper was through I was still left with questions and questions that I might not know of due to my limited knowledge in genetics (therefore a lack of scrutiny) The paper mentions how dinoflagellate algae create a symbiotic relationship with corals in nutrient-poor waters. Does this relationship change based on the over-saturated nutrient environments? Does it become less important as the coral would be less reliant on the algae for food and therefore might bleach them off? The paper then double downs this notion that it is still unclear about the nutrient transfer aspect of juvenile corals. Another major question that I had was why the Strain SSA01 was able to establish a symbiotic relationship with Aiptasia larvae but not the coral larvae and would this lead to implications in research where the different strains would affect the results in terms of incorporating them with coral since Aiptasia is often used as a model organism.

This paper provided more evidence as to why researchers can use Aiptasia as a model organism for coral since the symbiosis experienced is closely related to taxa. In addition, it gave rise to some potential confounding variables that would be present in experiments such as how phagocytosis efficiency will be affected based on the size of particles which could result in potentially different growth rates in groups if the Aiptasia are unequally distributed in size. Another potential confounding variable is the number of algae present in the water in terms of growth. Besides this, it did give information into how Aiptasia obtains its dinoflagellate relationship which happens after birth.